After a month filled with testosterone (Lee, Nagui, C., and C.'s crew), it is great to finally have some girls to hang out with! We meet Sabina and Peter, Hailu, and Vanessa (whom we met on the bus from Addis) for breakfast. We try ful (fava paste) and fatira (deep-fried thin dough stuffed with scrambled eggs, onions, and peppers). We also order sambusas (deep-fried pastries filled with meat or spicy lentils), which we haven't had yet in Ethiopia but used to often eat back in the States.

Then we buy 3 large bags of khat and head to Hailu's friend's apartment 'with a clean bathroom'. 'Clean' turns out to be a very subjective description, there is also no running water and the toilet is not hooked up to the pipes. We chew, watch the Olympics, and leave for the Harar Brewery to drink their light beer and the dark one, dubbed 'Obama'.

Dinner and drinks complete the good day. We return to the hotel greeted by fleeing cockroaches.

I'd definitely not recommend Ethiopia to those who are scared or highly disgusted by cockroaches. I'm happy they are not spiders or those nasty long-legged mosquitos!

In the morning, we pack our bags and leave the hotel. We're moving to Vanessa's or, more precisely, to Sylvie's. Sylvie teaches French at a local school. The girls were put in touch with each other by a mutual acquaintance. They met just once, in Addis, when Sylvie was leaving for the summer and passed the keys to Vanessa. Vanessa, in turn, invited us and that's how we ended up in the house of Sylvie, whom we never met.

The house is large and comfortable, it's located in an area popular among expatriates, and has its own guard.

The three of us wander around Harar and when the night sets, we go to see the hyena feeding (more on it in the next post).

We spend the rest of the evening reading, writing, watching shows on a flat screen TV, and lounging on a couch. It's precisely the evening we were longing for.

Our trio returns to the walled city for more rambling. It's sunny and very very bright - almost all buildings are freshly painted white. It's annually done for Ramadan, as white symbolizes peace. Soon, they will return to their normal mosaic of colors. I make a promise to myself to return to Harar to see it.

Today is the first day of a long fast. Ethiopian Orthodox Christians fast 250 days a year. The butcher stands, usually filled with life (and death) are now deserted, circled only by disoriented and hungry dogs and cats - the regular recipients of meat scraps.

For dinner we order a huge platter of fasting food. There are 2 kinds of beet dishes on it. One of them tastes just like buraczki we make in Poland! Beets are fairly common in Ethiopia but I have yet to see them on a menu in an Ethiopian restaurant in Northern America or Europe.

We return home with a bag of khat, a few beers, and warm sambusas wrapped in a newspaper. We watch TV, listen to the rain, and play cards. We feel terrible, we have such luck, Vanessa probably thinks we're cheating!

We'll leave Harar before dawn. We say our goodbyes before heading to bed and I know that we will know this girl for a long time. We're not parting ways for long, we see each other again in Addis before leaving Ethiopia. 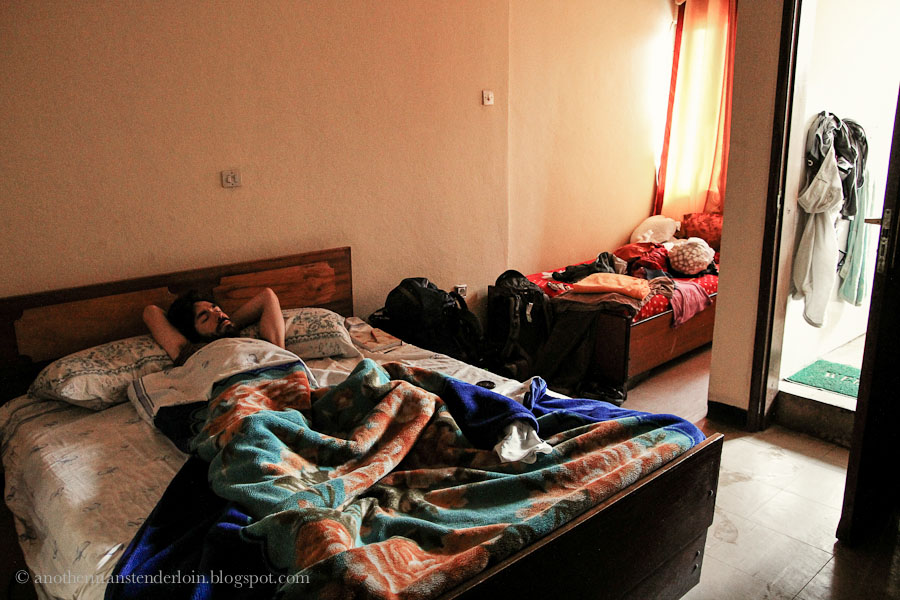 The hotel had some major issues: no hot water (although included in the price), power outages and cockroach infestation like I've never seen before... 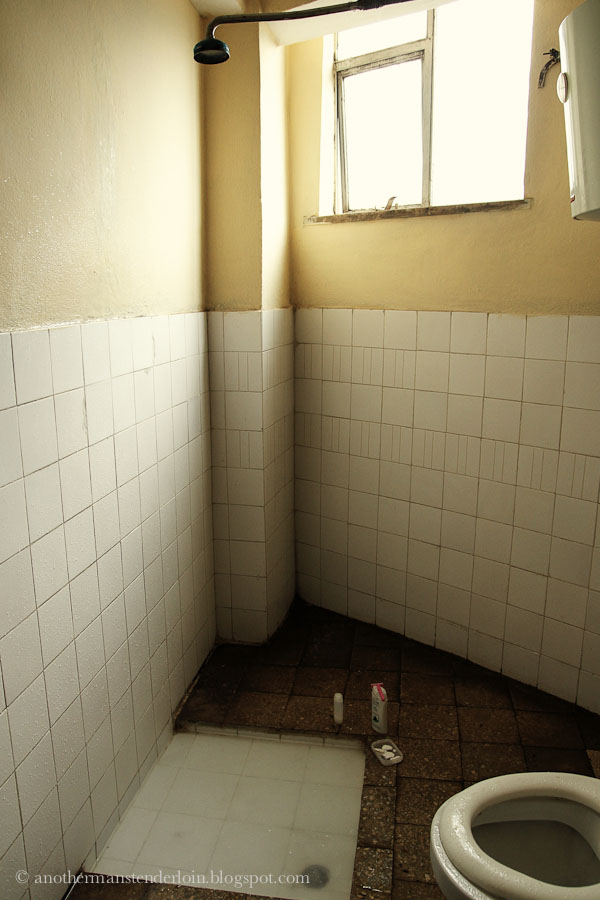 ...and the bathroom turned into a pool after every shower... 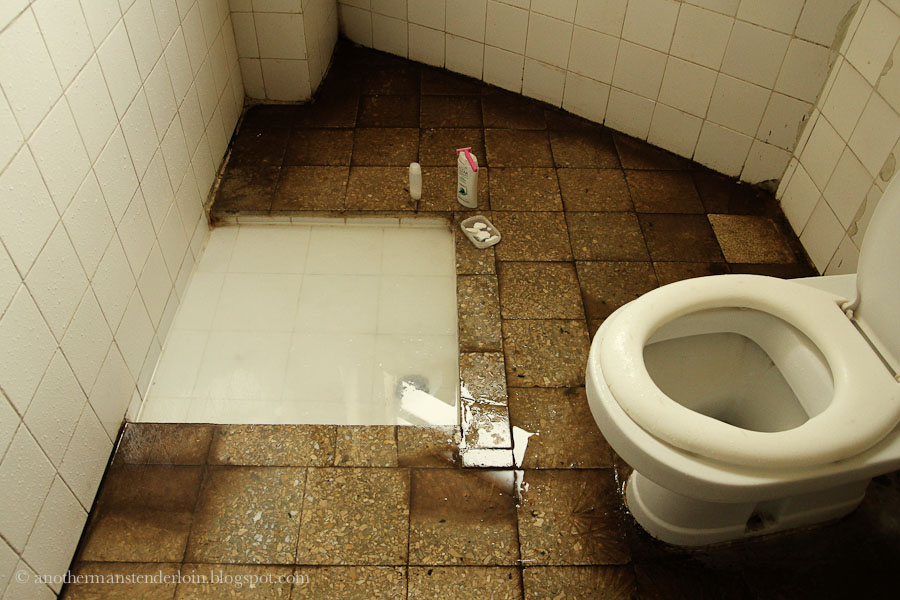 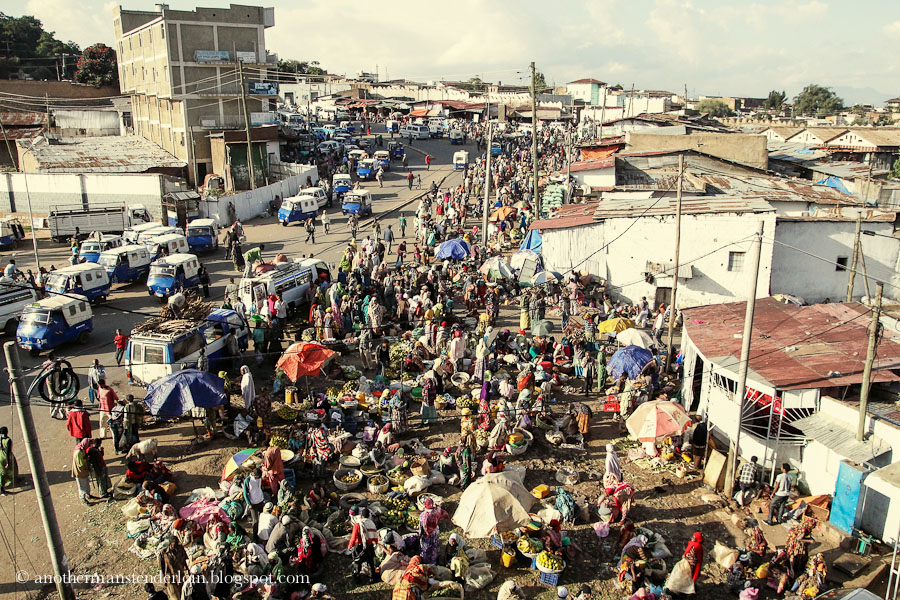 ...but the view from the balcony compensated for all the shortcomings. We were right above the market! 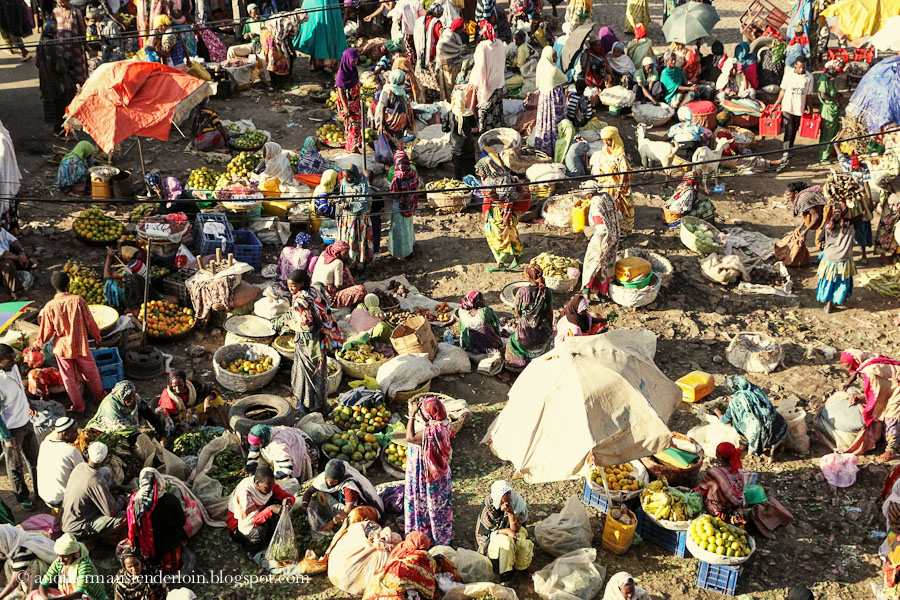 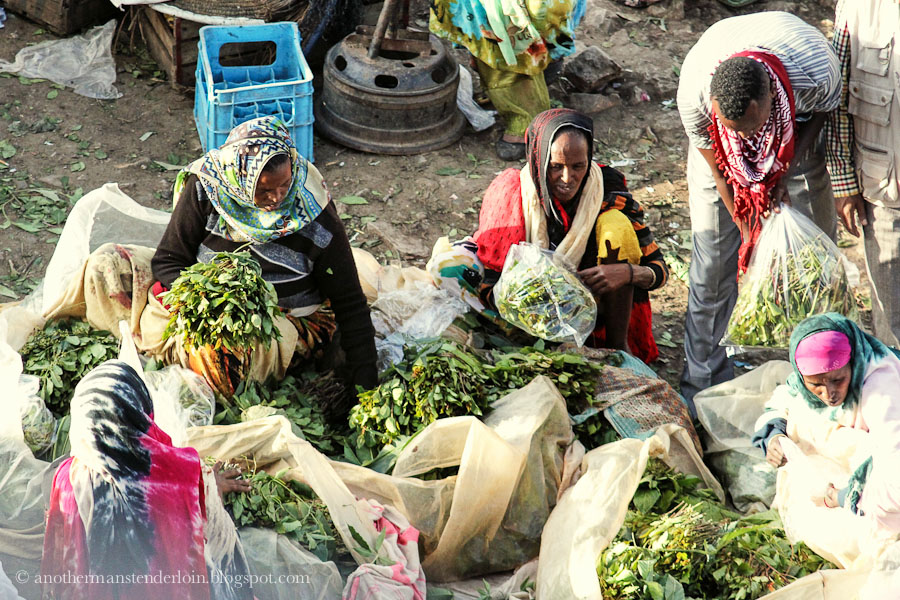 A large part of the market was devoted to selling khat. 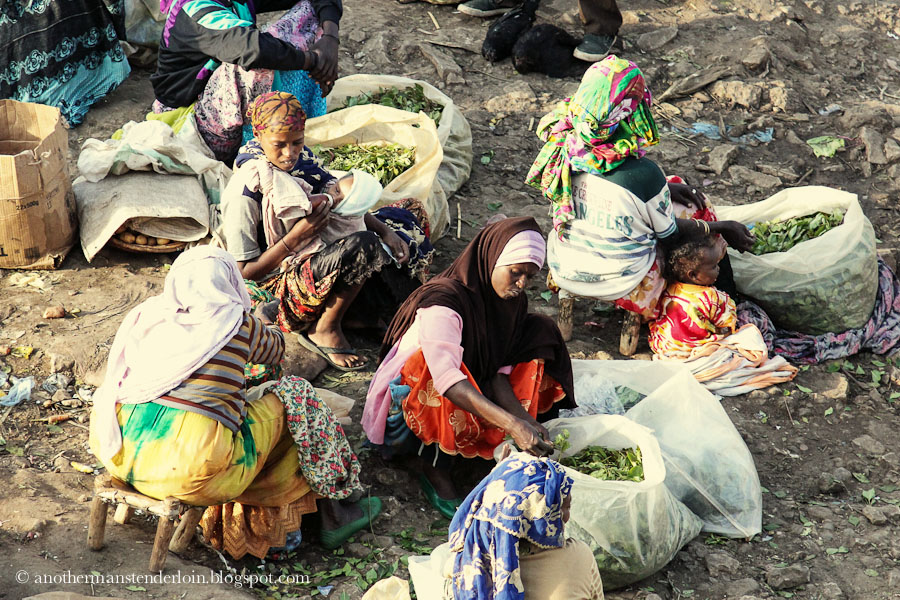 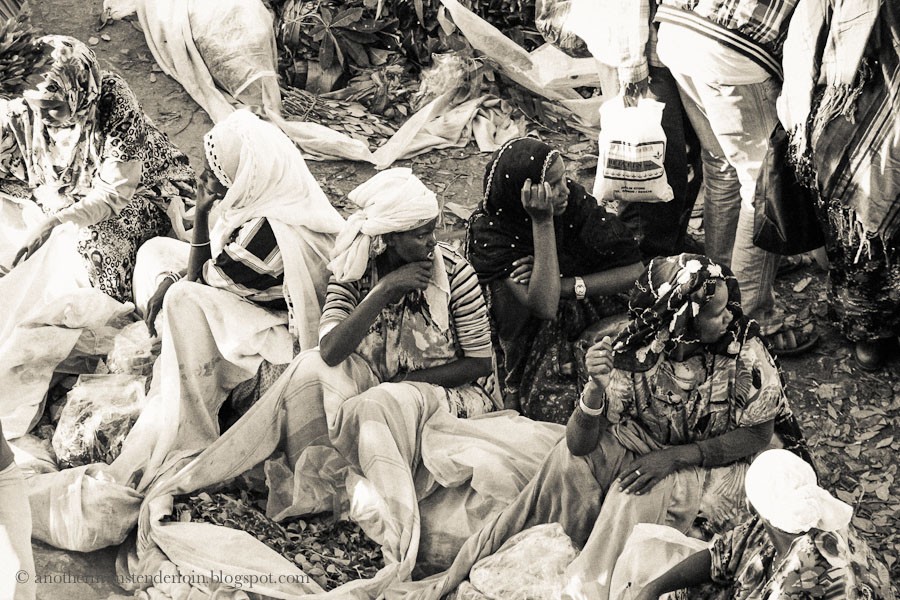 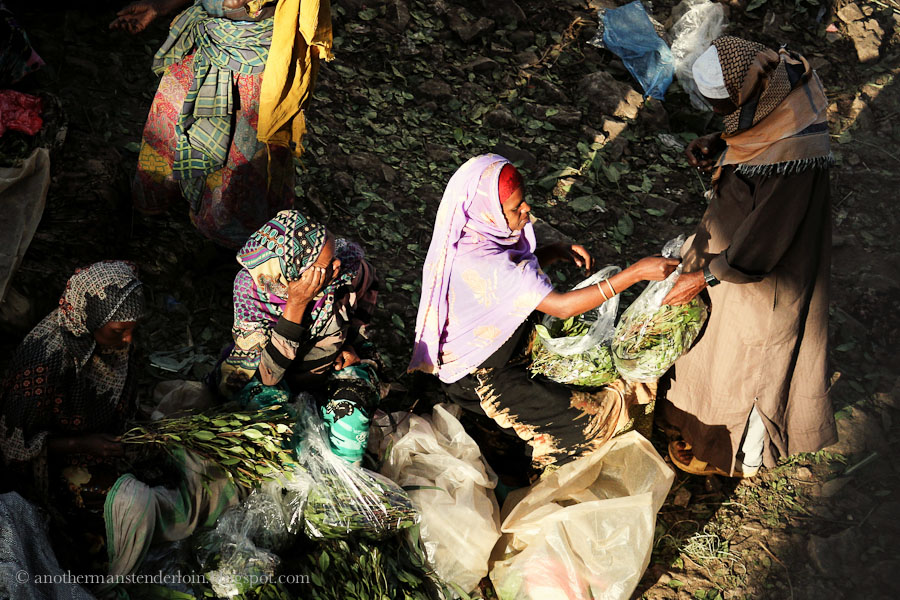 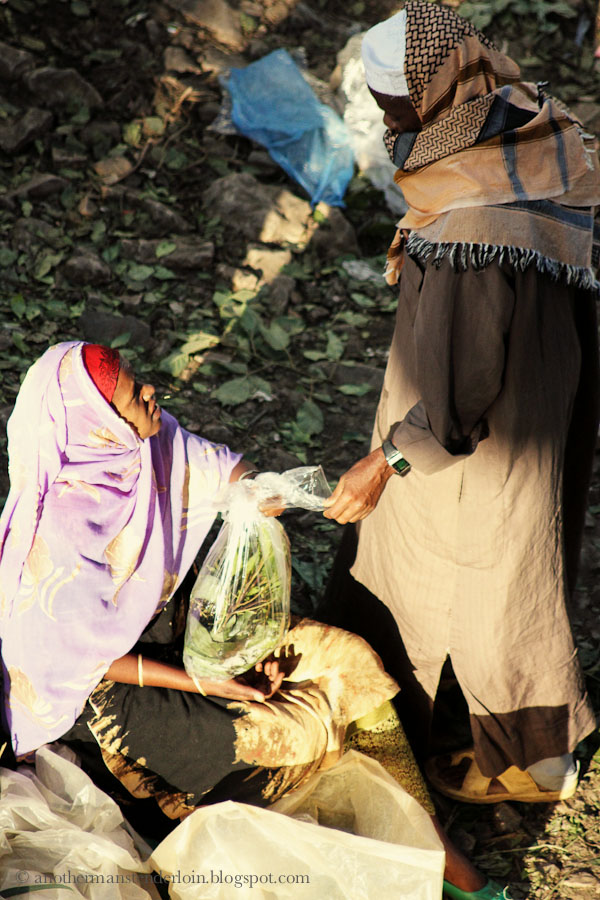 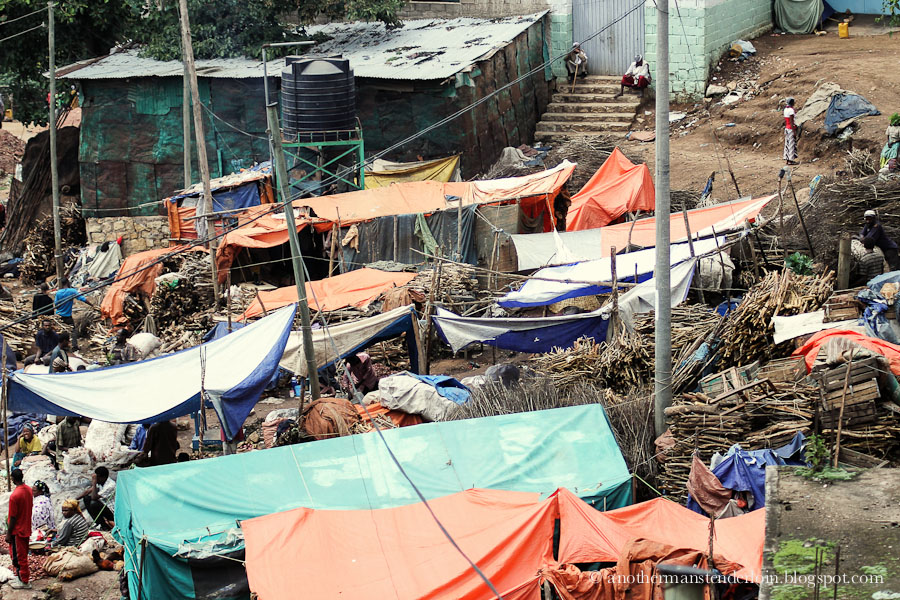 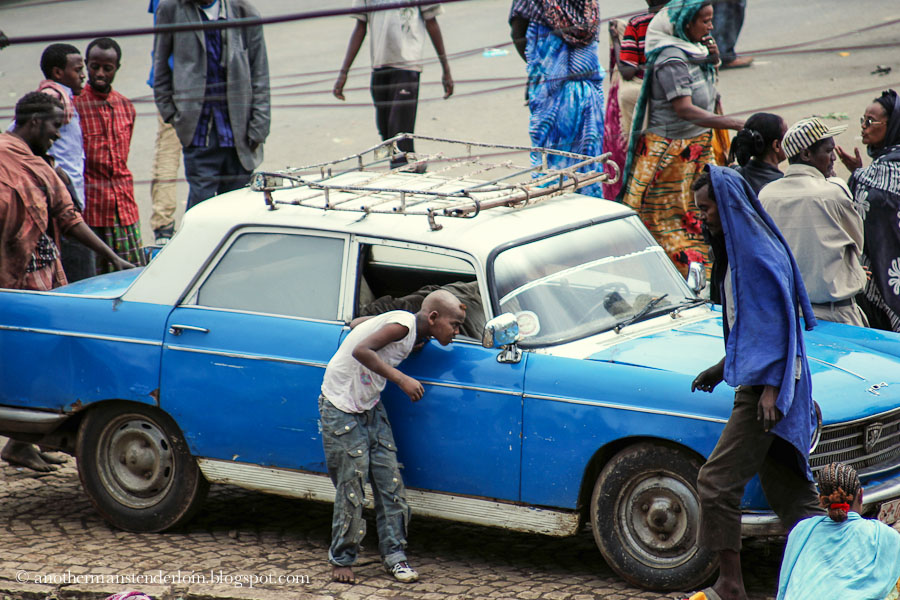 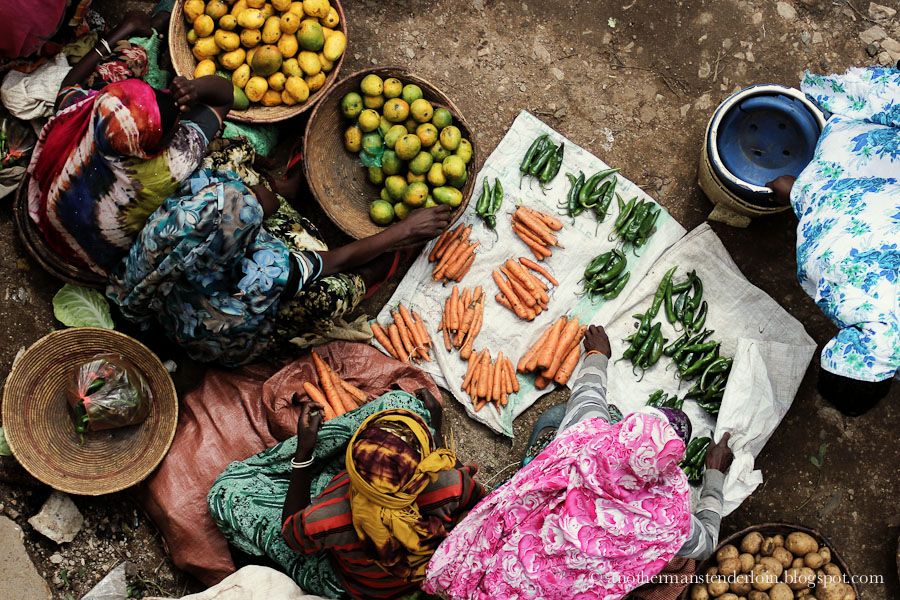 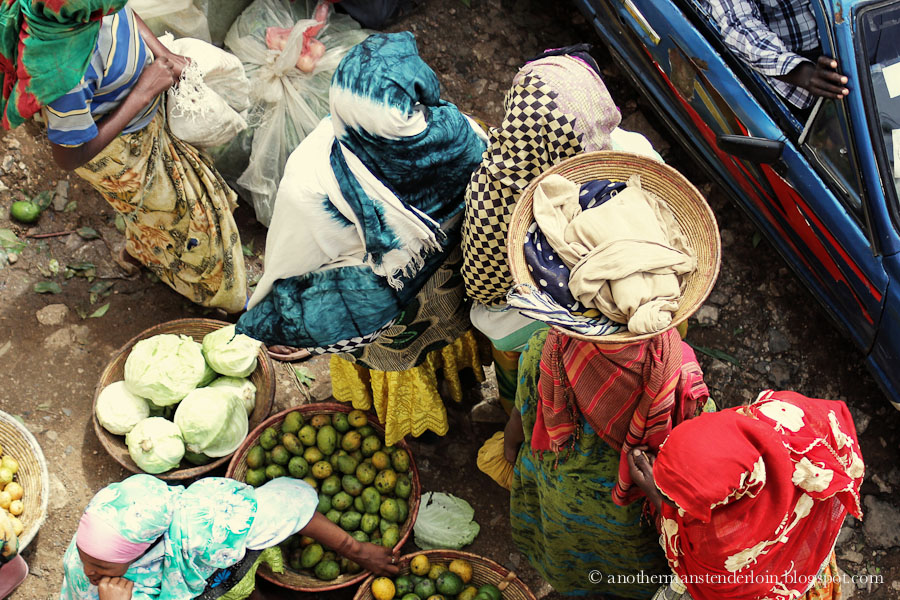 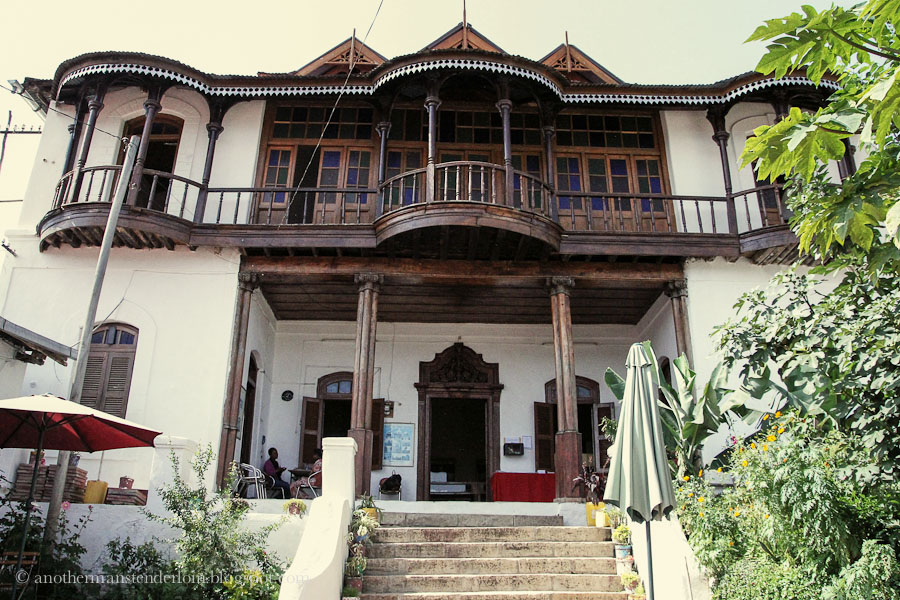 Rimbauld's House where the French poet Rimbauld never actually lived. We waited for a long time for it to open and it never happened. At least we got some rest in the shade. 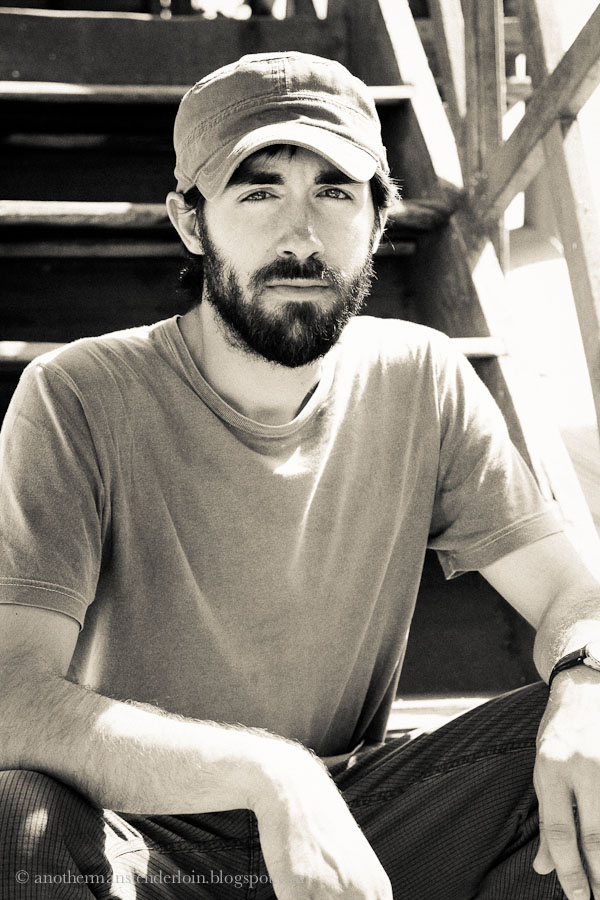 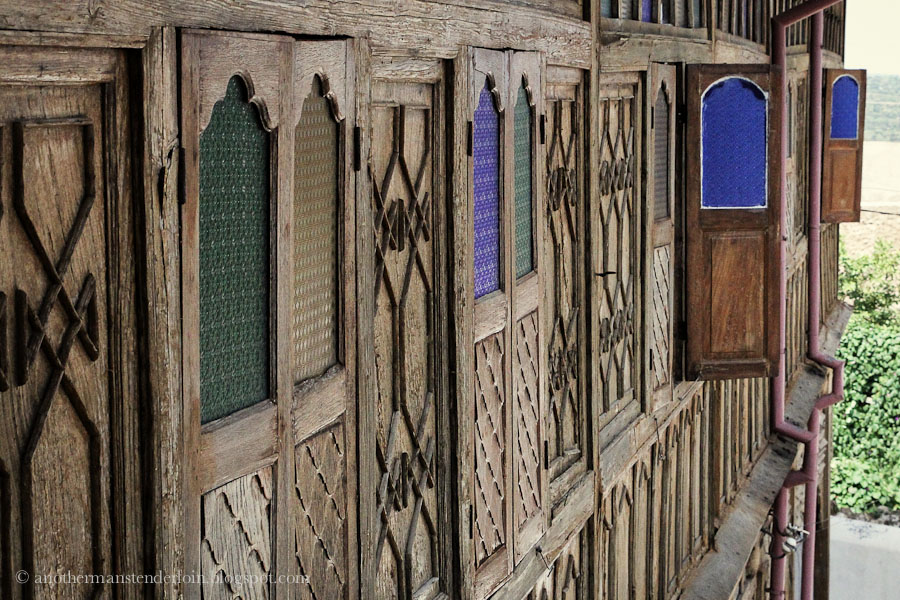 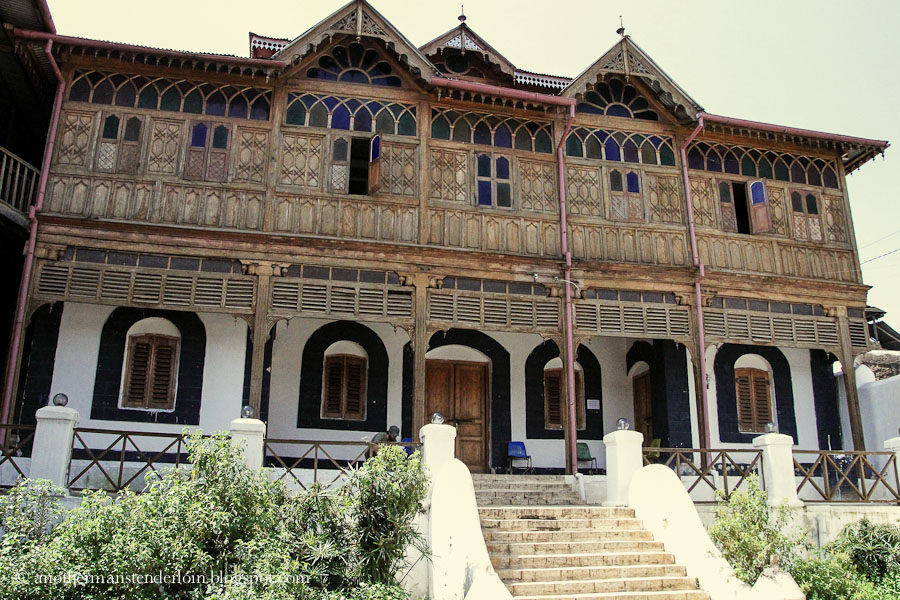 A palace of Ras Mekonnen, the father of Emperor Haile Selassie. Supposedly, Selassie spent a large portion of his childhood in this house. 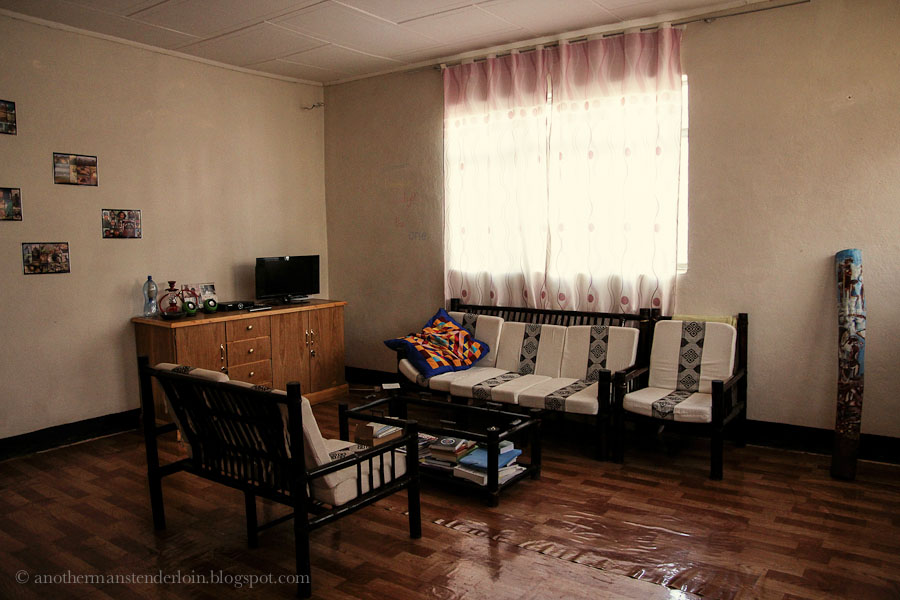 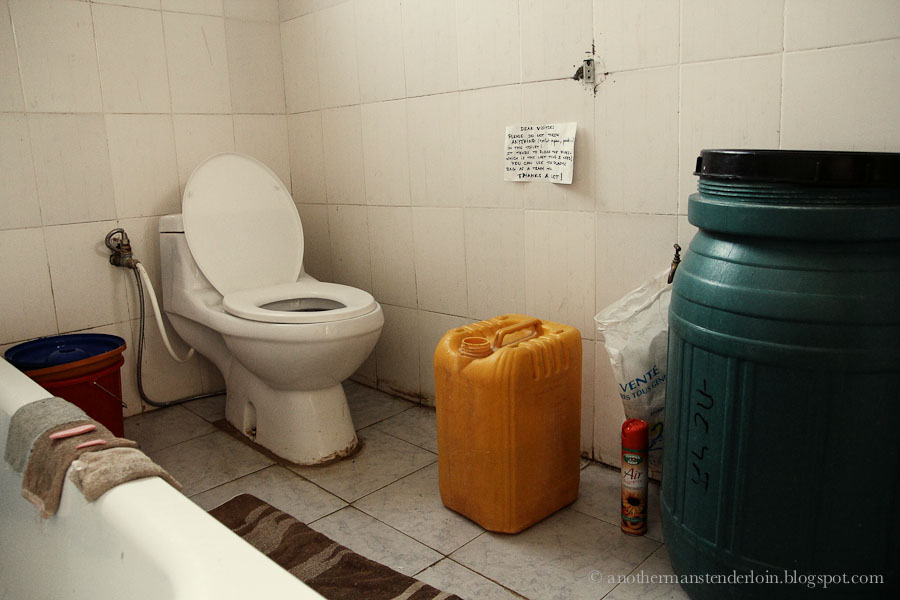 Water is fetched in yellow tanks by the guard. After it is used for bathing or washing clothes, it is dumped into the barrel and used for flushing the toilet. 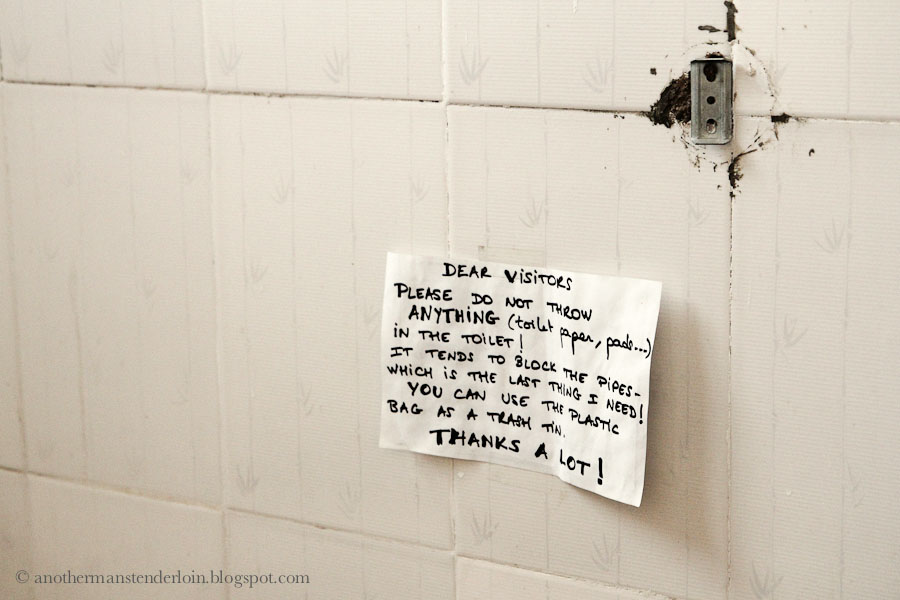 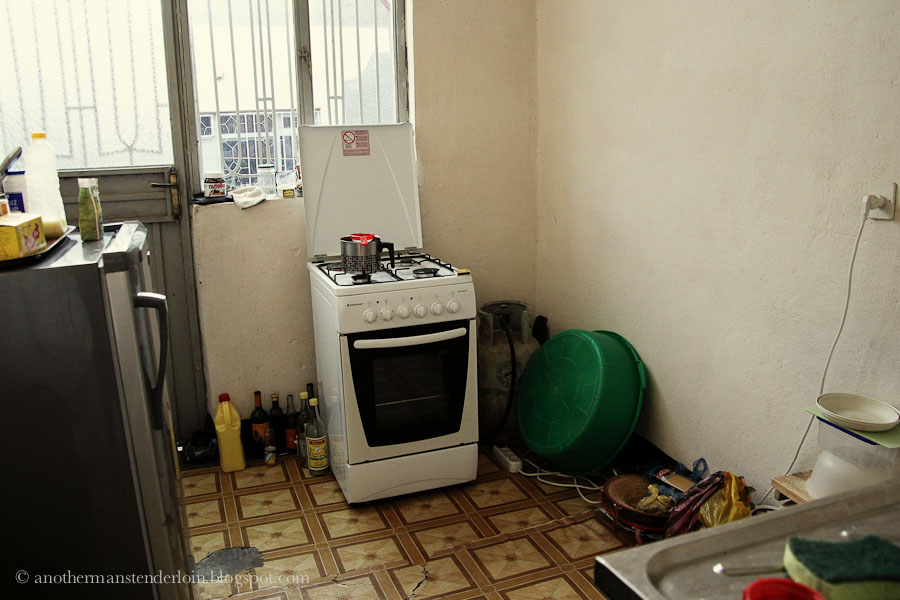 The green baggie on the fridge is wonderful local tea. We had it for the first time at Sylvie's and now we always keep it at home (fortunately, it's available at our neighborhood Ethiopian store!).

Tyler: Can I ask your name?
Ally: Anonymous.
Tyler: Anonymous? Is that Greek?